The once non-mainstream, niche Y2K style is roaring back with its dominance on Instagram and Facebook to resurface as a complete surprise to the fashion industry. But the renaissance not only ripples in garments——the previously lesser-known, marginalized sports like frisbees, land surfing and flag football are leading viral phenomena in outdoor activities. All these validate the fact that niche becomes mass, while youth subcultures are prevailing and popularizing. 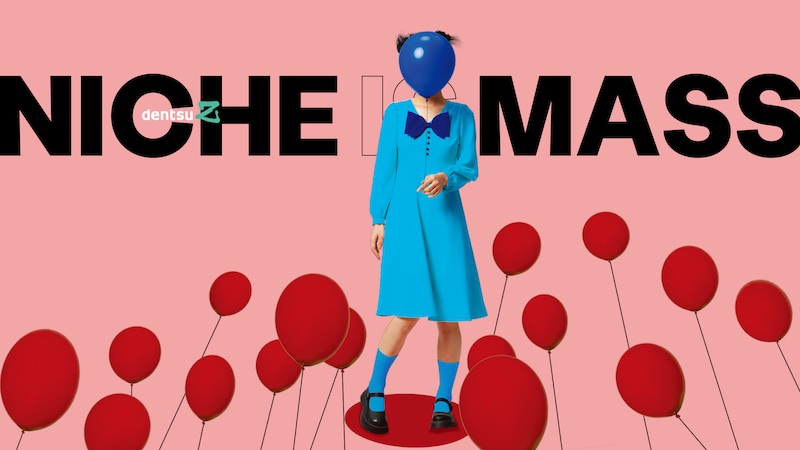 The youth subculture, primarily shaped by younger generations, is a socio-cultural morphology that differentiates and resists, yet affiliates and intertwines, with the dominant cultures and the cultures of the older generations. Young people assemble in groups around a common set of interests to build up their distinctive cultural communities.

Calculated by netizens, the existence of youth subcultures in the contemporary Chinese market can be divided into ten broad categories with at least 72 varieties, including Hanfu (traditional Han clothing), niche sports, niche shows, blind box figurines and collectibles, costume play, MAD, board games, fandoms, metaphysics, eSports, dolls, deal hunters, and more. Nonetheless, a myriad of factions can be further segmented and subdivided from within each variety. For example, while the ACGN communities include comics, anime, games, voice acting, original works, adapted works, and more, comics can be further categorized into MG comics like One Piece and Douluo Continent, harem anime, BoysLove, LoveLive, and more. As a result, due to the subtle and refined classification of each cultural group, it has become a well-known fact that the more niche, the more professional.

Despite different communities having their own exclusive languages, communication styles and cultures, they are not in opposing camps. Crossover collaborations, integrations and mashups also exist. Nowadays, we can see that fandom cultures cross the threshold of the eSports industry, as fans support teams and players in the same way as for pop idols, while the team officials also create their own celebrities and make the industry entertaining.

The landscape of integrated multiculturalism has generated a larger space for the development of youth subcultures thanks to the popularization of new media technology. Unlimited by time and space, young generations establish social networks with strangers online exchanging their ideas on subcultures and shared values. Distinguishing from the traditional social networking, which is driven by the connections of families, communities, schools and businesses, youth subcultures cherish the bond of shared interests. As the old saying goes, “it’s such a delight to have friends coming from afar.”

Jubensha (script murder), a role-playing game, is one of the latest crazes among younger generations who look for social connections. In a group of six or seven players, characters are assigned from a scripted murder scenario and thrown into a four-to-five-hour rummage for clues as they attempt to solve a crime. Through role-playing, reasoning and deducting, players can mingle with each other and exchange clues and thoughts in free-flowing socialization. By far, Jubensha has bloomed into an industry of billions and become a rocketing trend that attracts brands with its lucrative business. It is estimated that the Chinese market size of jubensha will reach 23.89 billion yuan in 2022 and climb to 44.81 billion yuan by 2025.

“In modern China, confrontations, negotiations and cooperations coexist between the youth subculture and mainstream culture. In an exclusive interview with China Newsweek, Lian Si, a member of the National Program for Medium-and-Long-Term Talent Development, said, "Chinese youth subcultures tend toward traditional cultures and collectivism, which is different from youth subcultures in other countries that focus on individualism and subversion."

Speaking of niche garments, Hanfu clothing prevails over Lolita and JK across the country with its rich cultural connotations. Depending upon the Hanfu manufacturing business, Heze City’s Cao county in Shandong province got rid of poverty and became a rich region in just ten years. Known as the "capital of Hanfu in China", Cao county accounts for one-third of the nation's Hanfu sales. The market size is expected to reach 12.54 billion yuan in 2022 and 19.11 billion yuan in 2025, with a year-on-year growth of up to 13.2% in a prospectively prosperous market. The merging between traditional Chinese culture and youth trends, such as cosplay, music, dance, cosmetics and technology, also becomes the cipher for mass popularity. As the tide of traditional Chinese culture sweeps across other communities, it presents a new-era interpretation. For instance, the traditional dance performances in the settings of ancient Chinese paintings produced by Henan TV, Night Banquet in the Palace of the Tang Dynasty and Ode to the Goddess of Luo River, demonstrated the essence of ancient aesthetics with digital technology such as 3D and AR and gained prominence online and ranked top in search on Weibo.

While the youth subculture serves as a trend indicator, the mainstream media looks to it for inspiration in order to overcome rigid stereotypes and promote mainstream ideology. At CCTV’s 2021 Spring Festival Gala Show, Danmu (on-screen bullet comments) was adopted, and China’s first virtual singer and vocaloid, Luo Tianyi, was invited for a joint performance with celebrities. Therefore, the merging and interdependence between mainstream cultures and youth subcultures can evoke a sensation beyond communities.

As the mainstream cultures see signs of weakness in their preaching and didactic communication tones, tedious and bland topics, as well as limited mediums, many brands hope to bridge the distance between Gen Z and themselves through conversations using community languages and topics.

The co-branded launch between RIO (alcopop beverage brand) and Bawang (shampoo brand) triggered resonance among many young people. Precisely pinpointing the fear that young professionals are commonly terrified of going bald, RIO cracked a joke by introducing a gift box that can “grow hairs” to engage and impress the targeted audience with their pain points. The topic “Head Up Without Hair Loss” reached 500 million views on short video platforms, attracted many thousands of discussions and generated over 17 million impressions.

Amidst a trend where subcultures verge on mainstreamlization, to realize brand rejuvenation, the understanding of niche cultures, the exploration of innovations and the acquaintance with Gen Z’s interests and communities will be fundamental.